“I’ve dreamed of starting my own cruise line since I was in my 20’s, and now the launch is finally getting close,” said Richard Branson, Founder of Virgin Voyages. “We have taken the time to think about every detail and craft an experience that brings the Virgin brand to life and disrupts the travel industry.”

RAZZLE DAZZLE
Razzle Dazzle delivers a healthy dose of nice with just the right amount of wrong. The “nice” menu offers plant-based vegetarian and vegan dishes including must have muchies such as the Impossible Burger. The “naughty” side enables sailors to order meat “add-ons” and offers to spike their healthy smoothies with boozy shots. To live up to the boldness of its name, Razzle Dazzle will not simply brunch but rather Drag Brunch, where sailors are treated to a performance by the Scarlet Lady’s resident drag performer and friends. For a small fee, sailors can opt to enjoy bottomless drag-inspired cocktails like the “Yasss Queen” and the Rizzle Dizzle, a CBD infused cocktail.

Virgin Voyages will offer a cheeky and cheerful approach to service, as well as an inclusive approach to sea travel that removes pesky add-ons. Its Sailors will enjoy free food at the 20+ eateries onboard, free group fitness classes, no gratuities or service charges, free Wifi and free basic beverages like soda, teas, and drip coffee, as well as still and sparkling water.

“At Virgin Voyages we are going beyond just great design, to defy and redefine luxury to be rebellious luxe,” said Tom McAlpin, President and CEO of Virgin Voyages. “This new luxury is about knowing you are taken care of, that you’re never being nickel and dimed, and what you want, even some of the things you didn’t know you wanted, are already taken care of for you.”

In conjunction with opening bookings for sale, Virgin Voyages revealed that all voyages will feature The Beach Club at Bimini, a Virgin Voyages experience in Bimini, Bahamas. There, Sailors can enjoy an epic beach day and/or explore the island flavor and culture of Bimini and its turquoise blue waters.

While on ship, Virgin Voyages Sailors will have the opportunity to choose from a festival-like lineup of all-new completely original Events & Gigs developed by some of the world’s most-talked about producers, directors and artists in the expansion of the company’s Creative Collective. Virgin Voyages’ entertainment Creative Collective includes Jenny Gersten, Randy Weiner, Sam Pinkleton, Ani Taj, PigPen Theatre Co, The 7 Fingers, Roslyn Hart and Alfredo Guenzani and the Spark Cooperative. 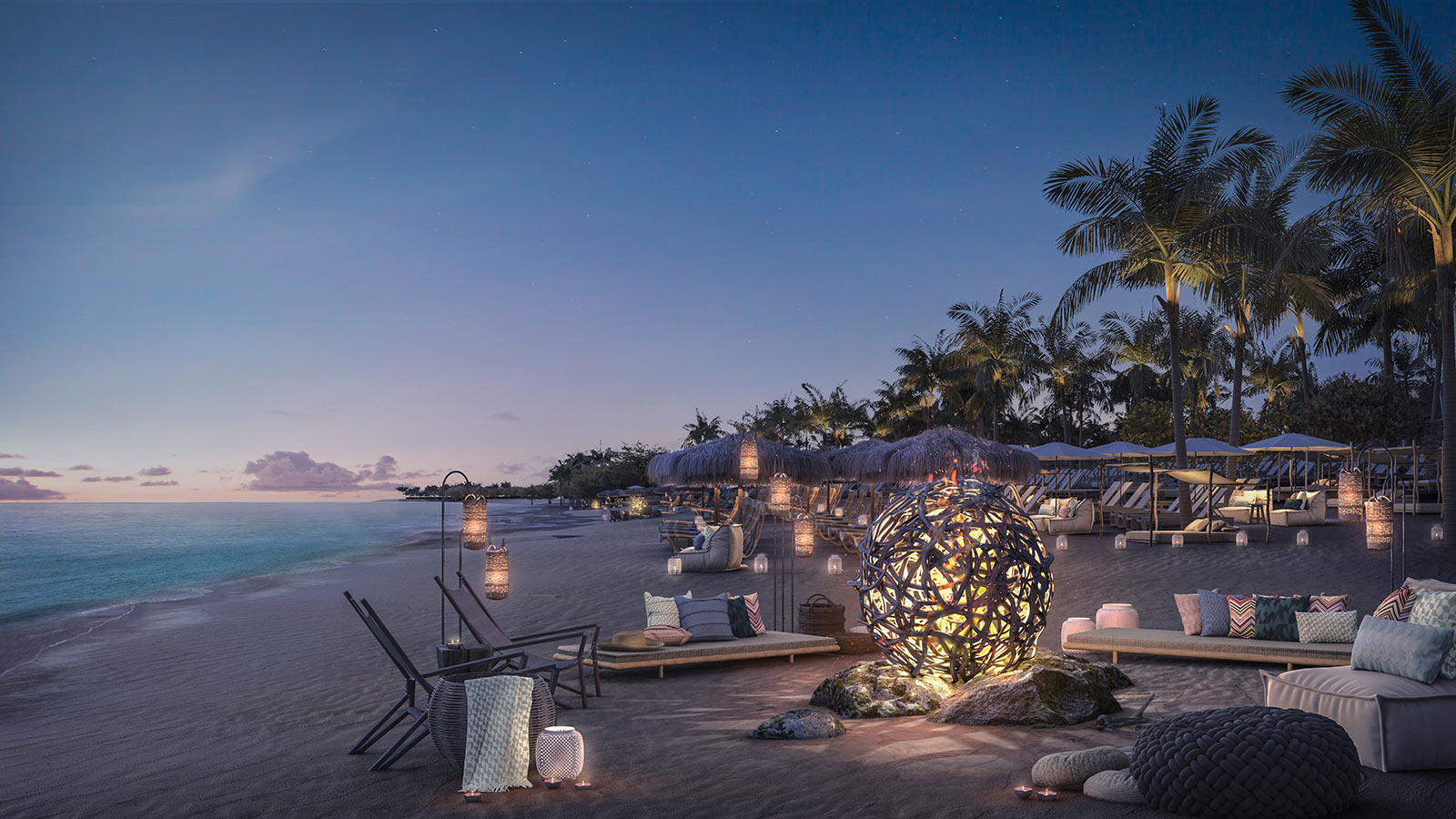 The Beach Club at Bimini

A cornerstone of every voyage will be The Beach Club at Bimini, where sailors can feel the sand in their toes in a stylish setting with white-sand and crystal clear waters and programming that will rival the best beach clubs in Ibiza and Saint-Tropez.

Just a short transfer from the pier, and built by Resorts World Bimini, The Beach Club at Bimini is designed with Miami-based architects EOA, Inc., featuring natural materials and soft earth tones that organically blend into the seascape. The Beach Club at Bimini will overlook the ocean and cascade down to the sea with an expansive lagoon-style pool as the central anchor of the club.

In the spirit of Vitamin Sea, the brand’s ethos of well-being, there will be moments of retox and detox throughout the day. Sailors will find areas of high energy and quiet spots for complete relaxation and introspection. Mornings at The Beach Club at Bimini will begin with yoga and meditation as Sailors enjoy the sounds of the ocean. The energy at The Beach Club at Bimini will be gradually amplified as the day progresses and turned back down as dusk settles in. Sailors will reach the high point of the day by the afternoon where DJ-led pool and flotilla parties will be center of the action. The night’s energy will wind down with a beach bonfire to close out the evening with an acoustic musical performance.

With music at the heart of the Virgin brand, Virgin Voyages will carefully curate the soundtrack for The Beach Club at Bimini, with seven-time Grammy-Award-winning artist and producer Mark Ronson named founding DJ, where he will be among the first talent to grace the turntables. Ronson, the British-born DJ, producer and songwriter, has topped the charts and collaborated with artists like Amy Winehouse, Lady Gaga, Adele, Miley Cyrus and Bruno Mars. Ronson will have four performances in 2020, with specific performance dates to be announced soon. 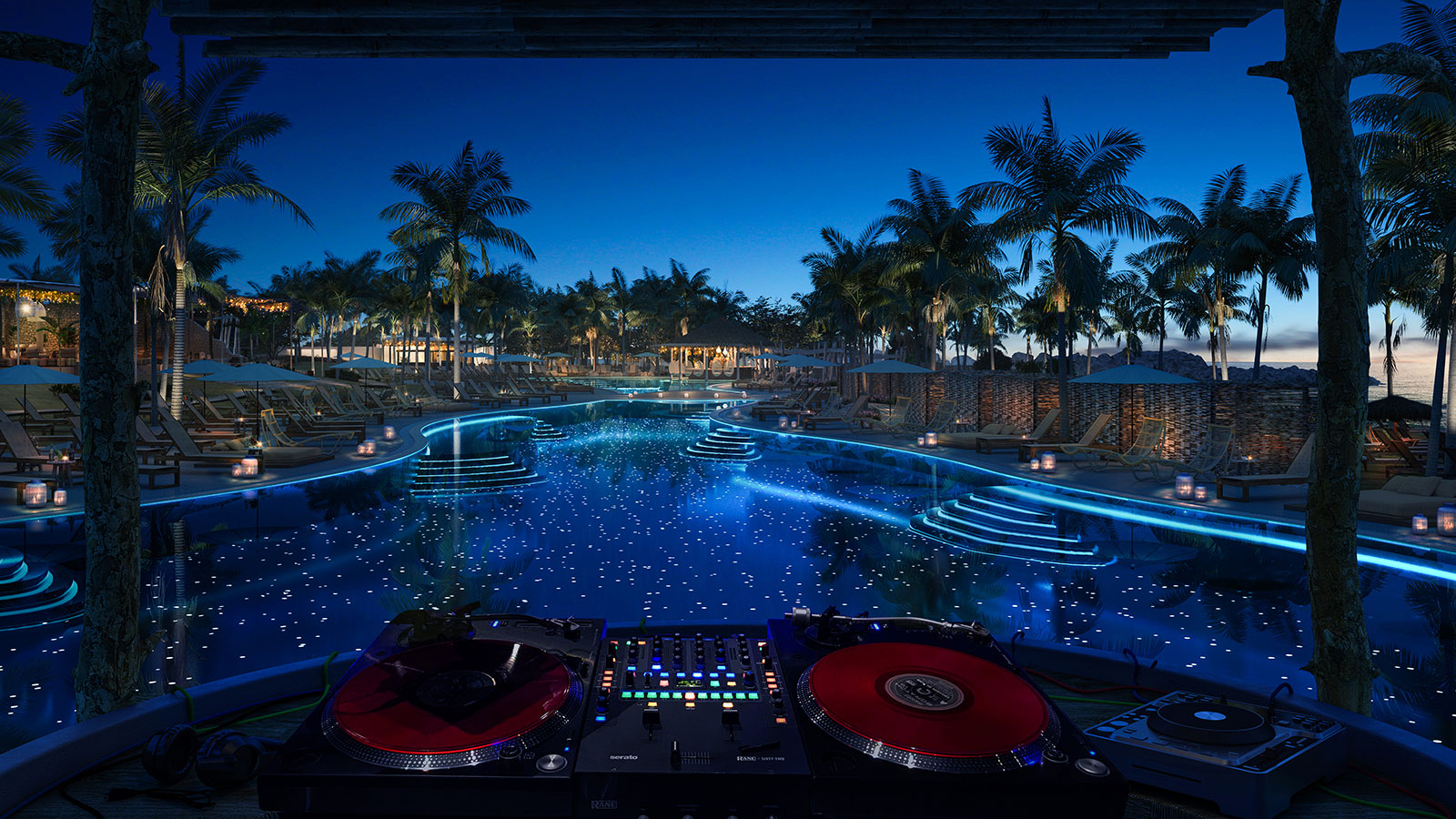 The Beach Club will also have complimentary food that is thoughtfully sourced. Its locally inspired menus will serve up island favorites such as conch and mango salad, banana leaf-wrapped queen snapper, Bahamian rum cake and more.

As Sailors start to explore the club they will be pleased to discover creative social spaces with hammock groves and six bars where Sailors can congregate in groups of friends. Those looking for a home base for the
day can enjoy the many beach loungers, or opt for a more private place to cuddle up, with beach-side and poolside cabanas available for rent. The Beach Club at Bimini will also feature active areas for watersports and beach play.

Sailors staying in RockStar Suites will have their exclusive slice of paradise at The Beach Club at Bimini, with a dedicated bar, complimentary food service, an outdoor terrace lounge, sun loungers and beach cabanas. Sailors looking to explore the island of Bimini will have ample opportunities to do so in this off-the-beaten path tropical destination. The island is a beach-lovers paradise with welcoming and warm residents. It was a known favorite of author Ernest Hemingway, who described it as “like the end of the world.” This intimate seven-mile island offers extraordinary sea experiences such as boating, snorkeling, and even wreck diving, with the SS Sapona just a few miles off the coast of the southern part of the island.

Scarlet Lady will feature a festival of choice in entertainment made up of bespoke intimate and authentic Events & Gigs created exclusively for Virgin Voyages, with the goal of providing Sailors with an alternative perspective on the world and play that ignites the spirit within. Sailors won’t just sit and watch shows, they may be asked to participate with the cast or become immersed in the world of the performance. In keeping with Virgin Voyages’ rebellious nature, the company will have no traditional cruise director on board the ship, and instead will have a dynamic group of individuals dedicated to making “Happenings” around the ship completely epic. From modern takes on classic stories, to interactive dance parties and off-the wall participatory acts, the experiences will break down the fourth wall and push the boundaries of traditional stage performances. Virgin Voyages’ entertainment goes beyond Broadway with first run experiences that have never been seen before on land or at sea. 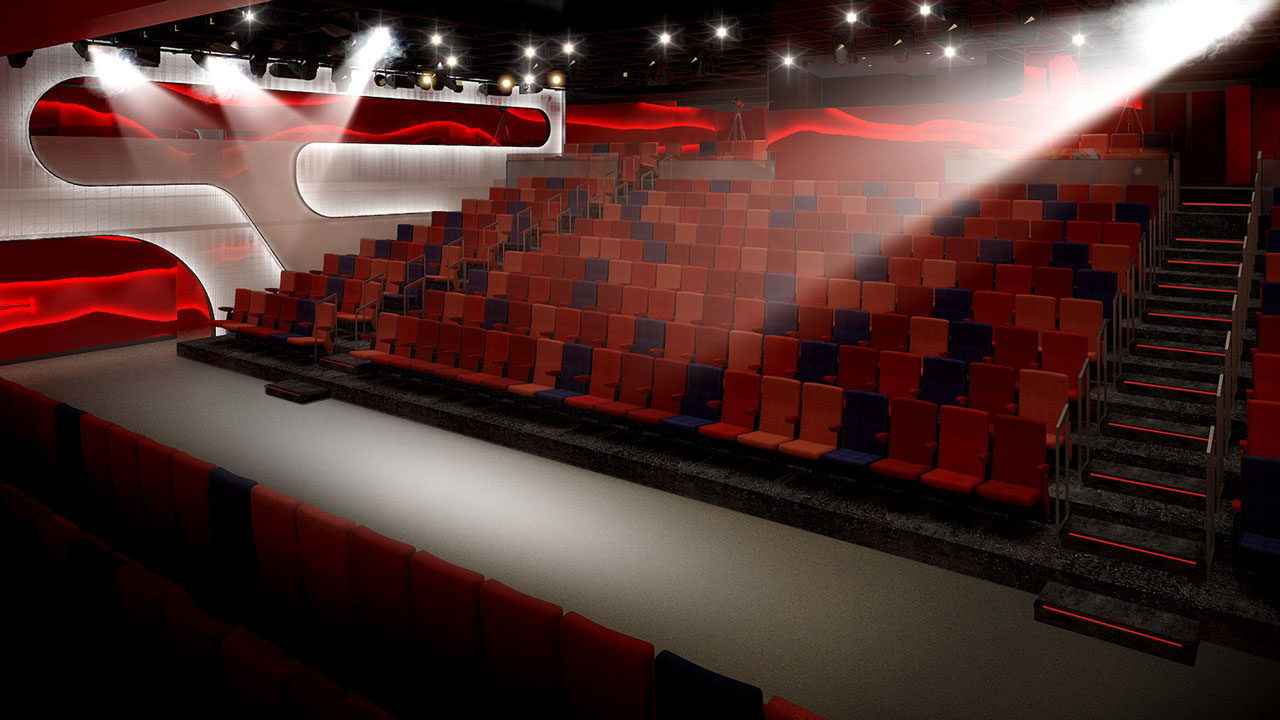 The company has expanded its Creative Collective from design and food to now include entertainment, working with some of the brightest creative minds, who are pushing boundaries of traditional theater and entertainment on land. To accommodate its variety of entertainment opportunities Virgin Voyages created The Red Room -- designed by renowned architects WorkAC and theater consultants Auerbach Pollock Friedlander -- as the first transformational multi-form theater at sea. It will transform into four different configurations - a traditional Proscenium stage, an alley stage used in fashion shows, a dance flat-floor configuration, and finally a unique reverse stage setup. This first at-sea theater will enable Virgin Voyages to create completely different experiences for each day of the voyage. 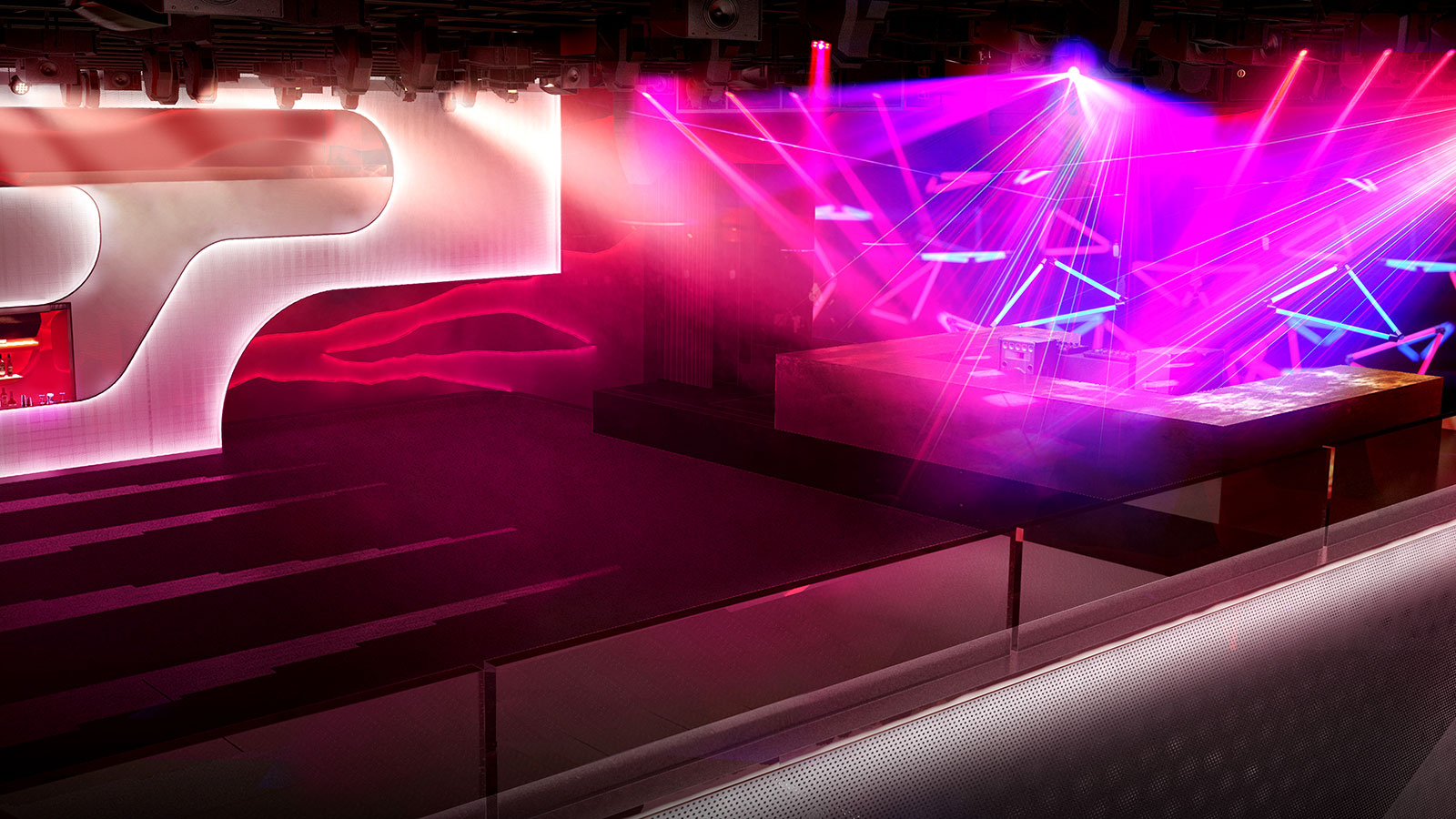 Scarlet Lady will feature six original shows that include a soon to be announced production by award-winning producer Randy Weiner (Queen of the Night, The Donkey Show, Sleep No More).

Phantom Folktales is a collection of song driven micro plays throughout the ship that seemingly appear out of thin air, and disappear just as quickly, created by PigPen Theatre Co.

Ships in the Night is an emotion-filled contemporary experience telling its story through the use of cutting edge digital projection interwoven with the authenticity of the human condition, and Duel Reality examines the age-old tale of Romeo & Juliet with a modern twist featuring acrobatic storytelling. Both performances were made possible through our collaboration with the innovative circus company, The 7 Fingers.

Additionally the creative development, production and installation of “happenings” that will take place throughout the ship were created by Spark Cooperative.

To add to the overall vision, Tony Award winning creative producer, Jenny Gersten, will serve as an artistic and production liaison between the core in-house Virgin Voyages Entertainment team and other members of the Collective.