If you meet enough singers and songwriters in Nashville, you’re bound to begin hearing their stories of rejection, heartbreak, and the times they almost made it big.  Candi Carpenter is no exception to that rule.  I’m sure there are some magical creatures out there who, like Lana Turner being discovered at Schwab’s Drugstore, come to Nashville, are immediately signed to a deal, and pump out a platinum record.  I also don’t know that I know a single one, to be honest.

I first met Candi Carpenter at a mid-December installment of the weekly Song Suffragettes concert series.  (Haven’t been yet?  Take my word:  GO!  Every Monday night at The Listening Room Cafe.)  Eric introduced us and the rest is history.  I’ve been following closely as she’s worked with producer Ron Fair on her upcoming album.  And believe me, you’ll hear it here first when it drops.

It’s hard to describe her voice without referring to others who have come before.  She has the edge of Joan Jett (which pays off in singing “I Love Rock ‘n’ Roll”), a powerful belt, and an earthy sweetness that defy categorization.  But the final impression is one you won’t soon forget.

Her songwriting plumbs the depths of the emotions we fear to unleash.  Family traumas, a bad marriage, a deal that went nowhere, and finding a way to bundle all of those up and sing about them are hallmarks of her of work.  But don’t think it’s all doom and gloom.  This is a woman who has found the silver lining and writes with as much humor as pathos.  (See her song “Just Do It” for all the evidence you need in that humor department.) 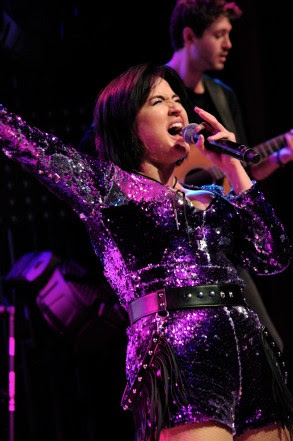 Her set at the Wildhorse Saloon on Monday night was the first in a while – and first I’d ever seen her – backed by a full band.  Shining in a fringe-bedecked, sequined purple romper cut up to here and down to there, Carpenter’s hour-long set featured the following songs:

Again, my thoughts come with some personal bias.  I wish I could actually apologize for that, but I also know talent when I see and hear it.  Candi Carpenter is one to watch, my friends.  Her voice defies being categorized as strictly country, pop, or rock, instead melting all of them into her own mystifying beauty.  Think of it as a knife draped in silk.  There’s an edge – danger, even, in her voice – yet it’s all tempered by a luminous sheen.

What you can bet money on is that she is a woman in full control of her talents.  At age 32, Carpenter knows her voice and writes to showcase its best qualities. She is one of many young women in Nashville who are defying what the radio station owners seem to think is what their listeners want and is doing it on her own terms.

Note: I wish I could guarantee you that 2019 is going to be the year that the women of country take center stage again, but you will have your own part to play in that happening.  Go out and support them in concert.  Listen to their music online.  Follow their social media presence.  And make your voice known by requesting to hear them played when their singles come out.  If you want more women to be heard, you’ve got your part to play.